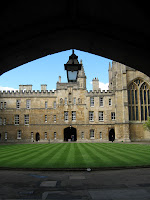 The city of dreaming spires lies 26 miles north of Newbury, it's famous its University and its place in history. For over 8oo years its been home to Royals and scholars, since the 9th century it has been an established town, althought people have lived here for thousands of years.
It was granted a city in 1542 and in the 2011 census it was believed that the population was around 151,900, nowadays the city is  a busy cosmopolitan town with a mixture of old and new buildings and it numerous Colleges, so this makes Oxford place an interesting place to visit.
You can hop on a tour bus and get off at many points around the city, there's plenty of quality restaurants, bars, pubs, cafes and other interesting buildings.
Oxford also has many museums you can visit, there's Oxford University museum of natural history, which houses the Universities scientific collection of zoological entomological and geological specimens. There's also the Museum of the history of science, the Ashmoleam Museum house art and archaeology items, Pitt Rivers Museum houses archaeological and ethnoggraphic objects from all parts of the world, The Museum of Oxford covers the history of the city and the University Museum is also famed for having the best preserved Dodo in the world.

It has to be the university and colleges which make Oxford well known, there are about 34 Colleges some go back hundreds of years. University College goes back to 1249, Balliol 1263, Merton 1264, St Edmund Hall 1270. Some of the famous colleges has to be Christ Church, Queens, Magdalen, Exeter, All Souls and Trinity. The Tom Tower at Christ Church was designed by Christopher Wren in gothic style, it houses the bell known as the great Tom.

Hertford College is well known for , The Bridge of Sighs, twhich is a bridge made of stone in a Venetian-style and it spans over New College St.
I think the most famous building in Oxford has to be, The Radcliffe Camera is Englands finest libary, it was designed by James Gibbs and it opened in 1714.


To get the best views of Oxford has to be from the 40 metre spire of St Mary the Virgin, which is across the cobbled road from The Radcliffe Camera. Some of the College grounds are open for a small fee and is'nice to get away from the hustle and bustle of the city and many tourist


Another place to visit is the covered market, there are loads of stores inside, if you went in a few years ago you would have found Deer, Geese, Rabbits and Pidgeon hanging outside the many Butchers in there. One thing that brings people to Oxford has to be the ITV Programmes Inspector Morse which Starred the late John Thaw and Kevin Whatley, the series ran from 1987-2000. Now Kevin Watley stars in his own series called, Lewis, and he has Laurence fox starring along side him, you can even go on the Inspector Morse tour. Oxford is also well known for it's rowing, in april there's the annual boat race between Oxford University and Cambridge University. It was the idea of Charles Merival, a student at Cambridge and his friend Charles Wordsworth who was a student at Oxford. The first race was in 1829, the race is 4 miles and 374 yards long, it's takes place on the river Thames, it starts at Putney Bridge and ends up finishing at Chiswick Bridge. Sir Matthew pinsent who won 4 gold medals in a row for GBR also rowed for Oxford in1990, 1991 and 1993.
Some famous people have studied at Oxford, Alan Bennet - Playwright, Bill Clinton - President of the USA, Sir Christopher Wren - Architect, J J R Tolkin - Author and Academic, Sir John Betjeman - Poet, Stephen Hawkin - Physicist and Author,T E Lawrence - Lawrebce of Arabia and Sir Bernard lee - Inventer of the World Wide Web. So if you ever near Oxford I would make a visit to this city.

All Photos taken and owned by DDPearce of Darrins Photography﻿
Posted by Berksbornandbred at 10:07