Today we were going to a place that I've always wanted to visited, but in all the years I've been coming down here I've never made it, until today. Botallack tin mine lies on the north coast and just north of St Just, when we arrived I wasn't disappointed. Once here you'll find the two crown engine houses clinging to the granite cliffs and when I say Clinging I mean clinging. To reach these houses you go down a gradual slopping path, once there the scenery is breath taking, especially on a day like today when there's a swell on the sea which makes the waves crash onto the rocks below.

Crown mine extends for about 400 metres out under the Atlantic Ocean; the deepest shaft is about 500 metres below sea level.
A valuable product from tin smelting was arsenic, at the time arsenic was used in such products as dyes and make up.

In the afternoon me and my daughter took a small ferry across to St Michael's Mount as the causeway was still covered by the out going tide.Once on the island the first buildings you pass are the row of cottages that people who work on the mount live in To. Once you've paid for your visit (free to members of the National Trust, which I am), the first building you pass is the dairy which on 9th October 1987 was made a grade II listed building, it's octangle in shape and made out of granite. It still has its original fittings; slate shelves in the cool dairy and a fireplace in the dairy kitchen for creamers and for heating water and a large sink and draining board, its modelled on the abbots kitchen at Glastonbury in Somerset. The you climb a windt path path, which is steep in places.

Once you have left the dairy you must look out for the giants heart set in with the cobbles of the path.
The legend about the giant tells us that he was called Cormoran and he lived on the mount, he would wade across to the main land and steal cows and sheep to feed his large appetite. The villagers were getting angry with the giant for taking their stock, so one night a small boy named Jack rowed across to the mount and dug a large pit whilst the giant was asleep. As the sun rose that morning Jack blew a horn which woke the angry giant, who staggered down from the summit and he was blinded by the sun and fell into the pit and Jack then killed him with blows to the head with a pickaxe. It is said that if you lie down and place your ear to the heart, you will hear it beating, which is true....of course the only beating you hear is from your own heart. Opposite where the heart is lies the pit that Jack built to kill the Giant Cormoran.


Once you reach the castle you can see for miles around, the name in Cornish is Karrek Loes in Koes (meaning grey rock in the woods), the castle is located just 366 metres from Marazion.
In year 495 it is claimed that the archangel St Michael appeared before some local fishermen on the mount. After the Norman conquest, the Abbey was given to the Benedictine monks of Mont St Michel in France. The church on the summit was built by the French abbot, Bernard Le Bec, and through the middle ages the Mount became a major pilgrimage destination. Four miracles, have said to have happened between 1262-1263 would have only added to its religious magnetism.
Despite being a place of prayer, from time to time the Mount felt the steel of war,the battle of the roses and the English civil war are just two of the battles, the mount also survived many sieges.


This beautiful priory church dates back to the 14th century and in the summer season, the mount chaplain conducts services here of which everyone is welcome to attend for all or part of the service. The Services last approximately forty five minutes

The Armoury
﻿
﻿
The armoury hold a few items and here are just two of them, below are a couple of cartridge shells brought back by the Hon S.S. St Aubyn.

At the foot of the mount you will find the Island cemetery which is closed to the public. It hold the grave to previous occuppents of the Island and sailors that lost their lives at sea.


The castle has been the family home of James and Mary St Aubyn ancesters since the 17th centuary. They still live in the lower floors of the castle. When we left the island we manage to walk across the causeway as the tide had just gone out. 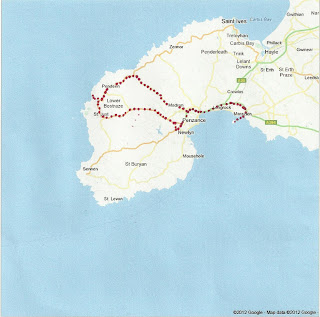 The Route To Botallack 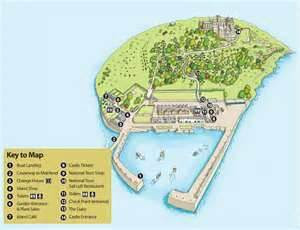