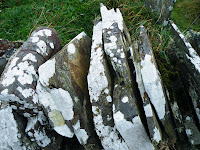 Today would be our longest day out of the holiday, we were going up to Bossiney which is just north of Tintagel to visit my cousin and make a visit to my favourite aunts grave at Trewarmett.
As I've stated in an earlier Blogg that I know this part of north Cornwall very well as I would stay with my aunt on every school holiday. I dropped my parents off at my cousins and then me and my daughter went into Tintagel to have a look around, our first port of call would be the Parish church of Saint Materian's. There has been a church on this site since the 6th century, the present church may have been created in the late 11th  or early 12th century.


The font is Norman, it's crudely carved and in elven, each of the corners are carved in the form of four faces,  snakes have also been carved into the font.﻿

The churchyard is surprisingly large for a church in this area, its had to been enlarged twice.
One of the interesting graves in the churchyard belongs to Domenico Cantonese, he was aboard the barque Iota which on 20th December 1893, was driven against the cliff of Lye rock which lies below Tintagel castle. The crew were able to get onto the rock apart from a youth, all 14 were saved. This grave is marked by a wooden cross (the name given in the official italian usage, Surname first: Cantonese Domenico, is on a lifebuoy).
﻿


After paying a visit to the church of St Materiana's we headed towards the centre of the village.
Tintagel has changed a lot since I first came down here for the first time in the mid 1970s, then it was small gift shops and sometimes the local farmer would bring his cows through the street whilst moving them to new pastures. Nowadays there are penny slot arcades and the shops now cater for the people with a bit of money, also when you got into most shops they have panpipes playing through out the shop and most sell things to do with the new age travellers.
﻿


On 6th July 1979, Tintagel was briefly subjected to the attention of the nation when an R.A.F Hawker Hunter fighter crashed into the village following an engine malfunction. It is said that the incident caused significant damage and consternation, but there was no deaths, one man was on a ladder when he saw the plane coming towards him and the only thing he could do was to jump off the ladder. One bit of bravery was by a tanker driver, he was stopped at the small garage which was opposite the cottage where the plane came to rest, when he also saw the plane, it was his actions that saved many lives as soon as he saw the plane he jumped into the cab of the tanker and he moved it in the nick of time. The Fighter managed to wedge itself between two cottages, the pilot stayed with his plane until the last possible moment and his actions also saved lives as he tried to steer the plane out of harms way. At the time my grandparents were staying with my aunt just outside Tintagel in a Hamlet called Trevethy. She managed to take some photos which my mother found recently and gave them to me to keep.I remember for years after you could still see the scrape marks on one of the walls  Below are photos taken back in 1979 and when I visited thirty two years later in 2012.﻿

When we finished looking around Tintagel we went back to Bossiney and my cousins house.
On the way back to Marazion we went to my dads sisters grave, (my favourite aunt). She passed away on 3rd November 2011 at the grand age of ninety six , She is buried in the Methodist cemetery in Trewarmett which is just outside Tintagel.﻿ 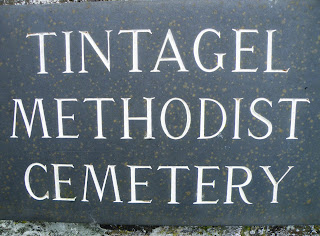 When we left the Tintagel area we made our way to the Kingsley Village at Fraddon, here they sell Cornish gift, books, confectionery, surf wear, clothing and they also have a great food hall with a wide selection of  Cornish food and drink.﻿


All Photos Taken And Owned By DDPearce Of Darrins Photography