St Enodoc lies the the parish of St Minver, why there's a Church here is a mystery. There is no doubt that this is an ancient place of worship. Some of the architecture dates back to the 12th century, which make makes the Church a Grade 1 listed building. From the 16th - the middle of the 19th century the Church was virtually buried by the sand dunes. Restoration work took place between 1863-64, since it's renovation in1864 this church has found its way into countless hearts including Sir John Betjeman and me and my family, I think if and when My daughter starts a family I can imaging her coming down here and saying "your grandad loved this place so much and every time he took the same old photos". Another Thing that stands out is the spire which leans over to one side.So if you're in Cornwall anytime I would pay this little a visit, you won't be disappointed

St Enodoc is situated on the North Coast of Cornwall near a crescent shaped beach called Daymer Bay, to get to the church you have to walk across a golf course and by the 11th green you will find this church surround by Tamarisk.
﻿﻿﻿
﻿
As you enter through a little lynchgate with its slate coffin rest in the middle, the first thing you notice is either side of the path the ground is a lot higher, this is due to when the church was buried up to its eaves in sand.

﻿﻿﻿﻿﻿﻿The only way into the church was through a sunlight in the roof, when you walk around the outside of the church today you can still see the sand is still halfway up the wall in places.
For many years now I have been coming to this church as I find it a calming place to sit and take in the sight and sounds. This place meant such a lot to my late wife that before she passed away she would have liked to have had her ashes buried here.This little church also meant a lot to Firefighter Fleur Lombard who lost her life fighting a fire in Bristol on 6th February 1996 age just 21 years,making her the first Female firefighter to die in civil action in Great Britain


As you step inside the porch on your left is a memorial to a Father and Daughter, John and Alice who died within days of each other. The Date they buried is Dec 1867
﻿﻿﻿﻿﻿
﻿﻿﻿
﻿﻿﻿
Inscription On The Headstone

Here is the love of my
Wife shown that where
Wee layith by this
It may be known
My wife and I did
Love so well a green
Yet I must part for god
Would have it so to be
From my wife.

﻿﻿Whilst walking around the Churchyard you will see plenty of headstones with the surname "Mably or Mabley"
﻿
On the left of the photo you will see the Font which is Norman, it has cable mouldings and is mounted on a modern Granite base﻿﻿
﻿﻿
All that's let's left of the Rood Screen is the base, it dates back to the 15th century.Its origins are unknown,but it's assumed that it was truncated at the time of the reformation or Commonwealth.

The tower is an 13th century addition, surmounted by its slightly curved broach spire.
The spire houses a single bell which was purchased in1875 from the wreck of the Immacolata of Barletta in Italy, which had gone aground on the and was lost on the Doom Bar, it carries the the inscription Sahel which indicates that either the vessel had been renamed or that it came off another ship.
During the war John Betjeman decided to drop the extra letter N from his surname to make it sound less German.
﻿﻿﻿﻿The memorial is to the three crew who lost their lives when the Maria Assumpta hit rocks after the engines failed. The captain was later charged with manslaughter after it was discovered that he took a route not recommend by the Admiralty. He made the bad decision of taking a scenic route be the Rumps that stick out from the coast and the small island called the Mould and Pentire point, when the Maria Assumpta was between these points, the engine suddenly stop and could not be restarted and the Maria Assumpta was smashed against the rocks taking Emily Macfarlane, John Shannon and Ann Taylor with her.
﻿


Not many people know when they go past this building to the Church, that this was once a Mortuary.When the body of sailors were found after shipwrecks along this part of the coast they were brought to this building awaiting burial . 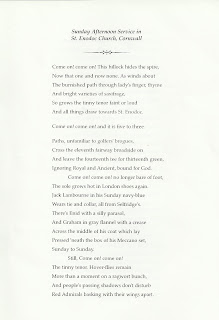 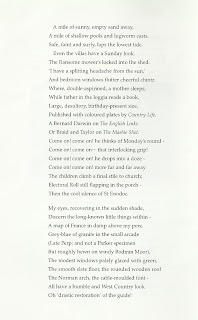 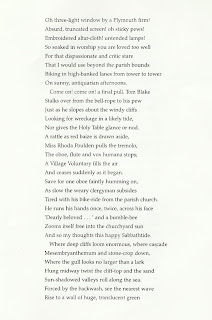 IF HEAVEN WAS A PLACE ON EARTH
Oh St Enodoc if Heaven was on Earth here it would be
I love sitting at the top of your churchyard to take in the views
Across the Doom Bar to the point of Stepper,Daymer Bay
And the start of the path to the cliffs of Greenaway

Some of the Golfers pant and puff
Sorry old boy you’re in the rough
Swish, good shot old boy you've made the green
On the tricky hole that is thirteen

In your churchyard you have ancient bones
Of people from Rock,Trebetherick and Polzeath
Who lived in the villages from their birth to their death