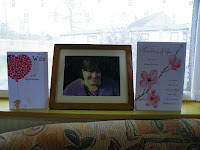 Today would have been my 24th wedding anniversary, I decided I would spend the day as my wonderful wife have wanted me to do.I knew one of her favourite places in Cornwall was the beautiful fishing town of St Ives. I took the 8.50 train from penzance to St Ives, this is such a lovely short journey. When you leave St Erth the train goes along side the mud flats of Hayle Estuary,where many wading birds can be seen. The views from the short journey are stunning as you pass the fine sands of deserted beaches and coves, also the colours of blue, green and the white caps of the North Atlantic waves that race to meet the shore.


﻿
When you get off the train you make your way down to the harbour area through small streets and alleyways, many artist have made this place their home as they say, "the natural light here is a lot brighter from other place", I think its down to that there's not many miles between the north and south coast. I find when I come here I always find something new to take photos of,(I think I take too many photos).

﻿
﻿
Over a pot of tea and toast I decided a plan of action of what I was going to do in St Ives, (apart from taking photos).I decided I would attack the narrow shop lined Fore St first, the nice thing about being down here this time of year is that there aren't many people around and you can move around very easily.
After the shops I walked around to the harbour area, I find as I walk around I'm always looking for a photo opportunity and you would be surprised how many there are.


For years when I've walked along the harbour I have passed the little fisherman's Chapel of St Leonard's, but have never gone inside. This time I thought I would venture inside, once inside there's a cabinet containing shipping objects and black and white photos, also you will find a brass memorial containing the names of  St Ives fishermen who have lost their lives, just doing their jobs

﻿
﻿
﻿
After the harbour I would make my way through the narrow streets to get to the Tate Gallery which is situated opposite Porthmeor beach. I have been to the Tate many times and there always different pieces of art. Some of the art I love, but there are some pieces that looking like something a child would bring home from school. I spent over an hour and a half walking around and making the most of the relaxing atmosphere.
﻿

﻿
﻿
After the Tate I moved next door to the old Barnoon Cemetery which hold hundreds or even thousands of graves. There are many different shapes of  headstone and each one has a different tale to tail, there are two graves that are an interest to me as they both died in the sinking of the RMS Titanic on 15th april 1912 in the North Atlantic, they were William Carbines and Stephen Curnow Jenkin.

﻿
﻿﻿
﻿
﻿﻿
﻿﻿
After the Cemetery I made my way down the small steep road known as Barnoon Hill, at the bottom of the hill there a junction where Barnoon Hill meets Ayr Lane and Back Street and it's here in Back Street that you will find the Dame Barbara Hepworth Studio.﻿﻿
﻿
﻿
A few years ago whilst exploring the back streets of St Ives, we came across a small garden that is well hidden down a back street, mostly the only people you see there are the local and workers having their lunch break in the gardens. Apart from me there was only one other person in the garden, I sat on a bench that was in a sun trap and it was very warm for this time of year.

﻿
﻿
﻿
﻿
﻿
After the garden I decided to take a slow walk back towards the train station, on the way I took a tour of the Lifeboat station, which houses a Mersey class Lifeboat, its official name is, The Princess Royal.


﻿
﻿
﻿
﻿
﻿
﻿﻿﻿﻿
﻿﻿
﻿﻿Seeing it was a lovely afternoon, I decided to sit on Porthminster Beach with a coffee and an Ice Cream, before I caught the train back to Penzance﻿
﻿
﻿
﻿ The Journey back Penzance you have to change trains at St Erth, here they still have a single box, plus they still have the old style signals.

All Photos Taken And Own By DD Pearce Of Darrin's Photography﻿