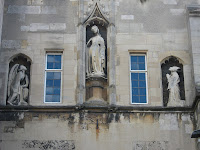 
New College is also famous for its cloisters, the cloister and bell tower were last to be completed (in 1400). The cloister were used in an episode of Inspector Morse called "Fat Chance", it also appeared and the 1997 James Bond film "Tomorrow Never Dies",where  it was used as the Swedish embassy.
In 2005 the cloisters were used in the film "Harry Potter and the Goblet of Fire, New College served as the Hogwarts backdrop for some scenes, notably that in which Draco Malfoy is turned into a ferret by Mad-Eye Moody.

The ancient Oxford City wall, belongs to New College, and is of particular interest. When William of Wykeham founded the College, he formally agreed to maintain the City wall when he acquired the land. Every 3 years the Lord Mayor and corporation of the City take a walk along the wall to make sure that the obligation is being fulfilled, it's a tradition dating back to the College foundations in 1379.

When the College was founded in 1509 by Sir Richard Sutton and the Bishop of Lincoln, it was known as Brazen Nose College (in full; The Kings Hall and College of Brasenose, often referred to by the abbreviation BNC). The College was built on the site of Brase Hall. It's name is believed to derive from the name of a bronze knocker that adorned the Hall's door. The main College site  comprises of three quads, the original small quad the small second quad is affectionately known as the deer park and the large new quad.
﻿
Brasenose College face's the west side of Radcliffe Square opposite Radcliffe Camera in the centre of Oxford.
The north side is defined by Brasenose lane, while the south side reaches the High Street.
To the west is Lincoln College. At the it's south-east end the College is separated from the University Church by St Mary's passage, the main entrance of the College can be found on Radcliffe Square, although not located on Turl Street the College has links with three Turl Street Colleges (Lincoln, Jesus, and  Exeter). The College is also physically linked to Lincoln College through a connection door, which Brasenose College members are permitted to enter Lincoln College through on ascension day each year. The door is opened for five minutes only and it's the only time during the year that the door is unlocked. Brasenose members are then served an ale by Lincoln College which id traditionally flavoured with ground ivy.
﻿ 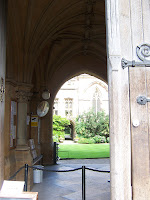 The College of All Souls of The Faithful Departed was founded by Henry VI and Henry Chichele (fellow of New College and Archbishop of Canterbury), in 1438, today the College is a primary and academic research institution with particular strengths in the humanities and social and theoretical sciences and an outstanding library. The main enterance is situated on the High Street near Cattle lane, the west side of the College and the west end of the Chapel looks out onto the east side of the Radcliffe Camera in Radcliffe Square,


The Chapel was built between 1438 and 1442, it remained largely unchange until the commonwealth- Oxford having been a Royalist-stronghold suffered a certain amount of the puritan's wrath.
The forty two misericords date from when the Chapel was built, and show a family resemblance to the misericords at Higham Ferrers,Rushden in Northamptonshire, as they were, also, possibly carved by Richard Tyllock. Sir Christopher Wren was a fellow from 1653 and in 1658 he produced a sundial which was placed on the south wall of the Chapel, until it was moved to the quadangle in 1877. During the 1660s a screen was installed, which was based on a design by Wren. However, this screen needed to be rebuilt by 1713. By the mid 19th centuary, much work was needed and so, todays Chapel is heavenly by and Victorian ideas.


The All Souls Library (formally known as The Codrington Library) was founded through a bequest from Christopher Codrington (1668-1710), a fellow of the College. Christopher Codrington bequested books worth £6,000 in addition to £10,000 currency, this bequest allowed the Library to be built and endowed. Christopher Codrington born in Barbados and amassed his fortune from plantion slavery, the library was completed ind in 1751 and has been in continous use ever since. The modern Library comprises some 187,000 items, about about a third of who were published before 1800.
The College are particulary strong in law, history, and classics.
﻿