R.M.S. TITANIC VICTIMS AND SURVIVORS
IN THE U.K
Whenever I go out for the day, I always check my Titanic book and see if there's any Titanic graves near where I'm going. So below are the ones I've discovered so far.
St Mary's Church, Kings Worthy, Hampshire
Albert Vale Barker﻿ 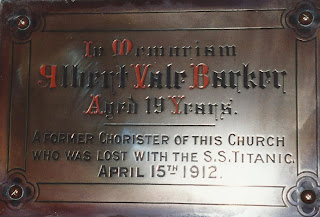 Inscription Reads
In Memoriam
Albert Vale Barker
Aged 19 Years
A Former Chorister Of This Church
Who Was Lost With The S.S. Titanic
April 15th 1912
Albert Vale Barker, was employed as a Assistant Baker on the Titanic, he died in the disaster. If his body was recovered, it was never identified.﻿
St Peter's Church, Bramshaw, Hampshire
In this small church, there's  a plaque inside the church and two family graves in the churchyard. Below is how they appear. 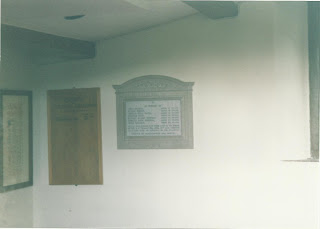 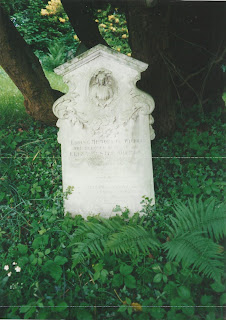 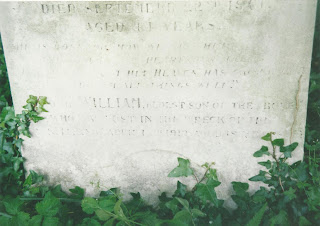 Inscription Reads
Ambrose Hood
Son Of The Above
Lost His Life In The Wreck Of
S.S. Titanic April 15th 1912 Aged 21 Years
Ambrose Hood, was a Second Class Passenger on the Titanic, he died in the sinking. If his body was recovered, it was never identified.﻿
Pitcombe Parish Cemetery, Somerset
Herbert John Pitman M.B.E 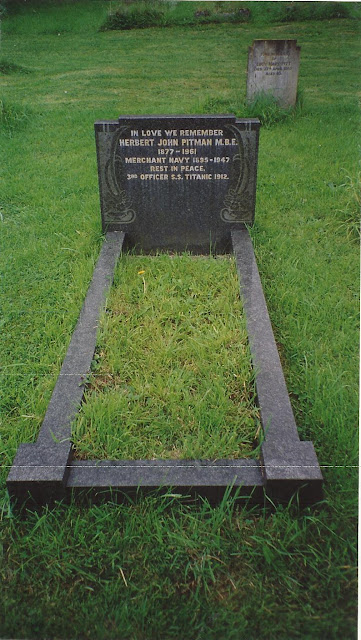 Inscription Reads
In Love We Remember
Herbert John Pitman  M.B.E
1877-1961
Merchant Navy 1895-1947
Rest In Peace
3rd Officer .S.S. Titanic
Herbert John Pitman, as a 3rd Officer his duties aboard the Titanic included working out the ship's position through celestial observation, finding the deviation of the ship's compass, general supervision around the decks, looking after the quartermaster's and relieving the officers on the bridge. he survived the disaster. He passed away on 7th December 1961, he was laid to rest in the small Cemetery in Pitcombe.
Romsey Abbey, Romsey, Hampshire
Arthur Ward
﻿
Inscription Reads﻿ 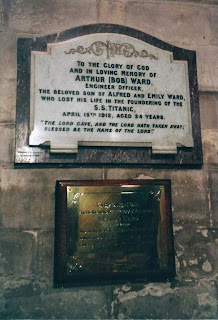 Inscription Reads
To The Glory Of God
And In The Loving Memory Of
Arthur (Bob) Ward
Engineer Officer
The Beloved Son Of Alfred And Emily Ward
Who Lost His Life In The Foundering Of The
S.S. Titanic
April 15th 1912 Aged 24 Years
Arthur Ward, was Assistant fourth Engineer on the Titanic. He was one of the brave men who stayed at their posts down below in the depth of the ship, right up to the end, to ensure the lights stay on for as long as possible. What went through their minds as they knew that they were going to die ?. If his body was recovered, it was never Identified.﻿
Studland Methodist Church, Studland, Dorset
Jacob William Gibbons 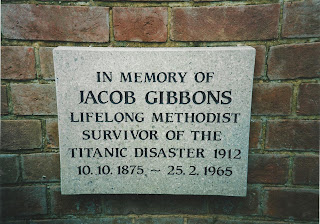 Jacob William Gibbons, was a Second Class Saloon Steward on the Titanic, he survived the disaster. He passed away on 27th February 1965, his ashes were scattered in the graveyard of Studland Methodist Church.﻿
Clevedon, North Somerset
John William Gill 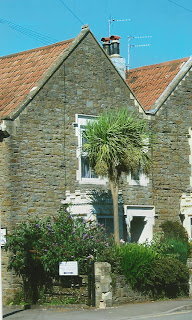 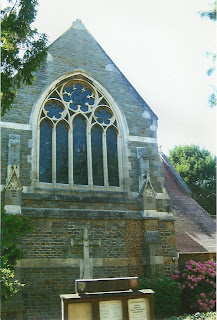 The Top photo is where John william Gill lived up until the time to left to take passage on the Titanic. The Church in the picture is St John The Evangelist in Clevedon. This is where he married Sarah Elizabeth Wilton Hodder on 14 February 1912.
John William Gill, was a Second Class Passenger on the Titanic, he died in the disaster. On 23 April his body was recovered by the Mackay-Bennett, his was the 155 body to be recovered and he was buried at sea the following day.
Brookwood Cemetery, Surrey
Sir Cosmo Edmund Duff-Gordon
Lady Lucy Christina Duff-Gordon 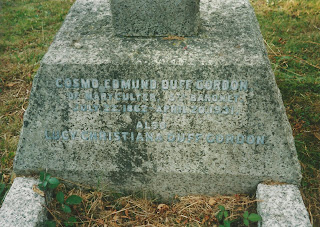 Inscription Reads
Cosmo Edmund Duff-Gordon
Of Maryculter 5th Baronet
July 22 1832 April 20 1931
Also
Lucy Christina Duff-Gordon
The Duff- Gordon's, were First Class Passengers on the Titanic, they both survived the disaster. On the night of the sinking they approached First Officer Murdoch and asked him if he and his wife could get into the lifeboat that Murdoch was supervising, murdoch replied that he would pleased if they did. When Lifeboat one was lowered at 1.am it only contained 12 people and seven of those were crew members. After the sinking a Leading Fireman in the lifeboat asked if they should go back for survivors, lady Duff-Gordon warned that they might get swamped by people in the sea. Sir Duff- Gordon gave the crew in the lifeboat some money to replace things that they had lost when the Titanic slipped beneath the Atlantic, some people saw this as a bribe.
Sir Cosmo Duff-Gordon died on 20th April 1931 Aged 69
Lady Lucy Duff-Gordon died in April 1935 Aged 71.
﻿
Godalming, Surrey
John George Phillips
Jack Phillips Memorial Cloister and Gardens 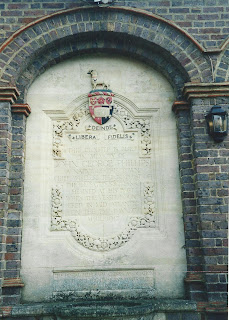 Inscription Reads
This Cloister Is Built
In Memory Of
John George Phillips
A Native Of This Town
Chief Wireless Telegraphist Of
The Ill Fated S.S..Titanic
He Died At His Post
When The Vessel Foundered
In Mid-Atlantic
On The 15th Day Of April 1912 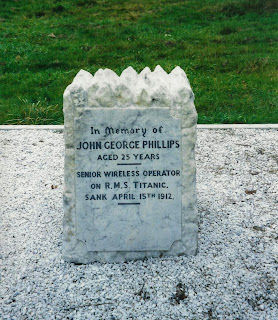 
John George Phillips, along with Harold Bride were the Marconi Wireless aboard the Titanic. Just before the Titanic struck the iceberg, John was about to take a well earned rest when Captain Smith arrived in the wireless room and told him to send out the distress call C.Q.D, later he would be the first person to send the new distress call S.O.S., both operators stayed at their posts just until the last possible moment. Both men jumped into the Atlantic and only Harold Bride survived, it was noted that when Bride was picked by the carpathia, he saw the body of Jack Phillips in the cold Atlantic water. Whether this is true I wouldn't like to say.
The town of Godalming are so proud of him, that there are many building and roads named after him, he is also remembered on the family grave in the Old Cemetery at Farncombe. His stone is in the shape of an iceberg.﻿
All Photos Taken And Owned By DDPearce Of Darrins Photography ﻿
﻿
I would like to thank is Brian Ticehurst whose books, Titanic Memorials World-wide, where they’re Located, and his other is called, Titanic Victims Discovered in the Old Cemetery-Common Cemetery.

My last thank you are to the many people who worked hard and discovered these graves, there’s too many to mention.